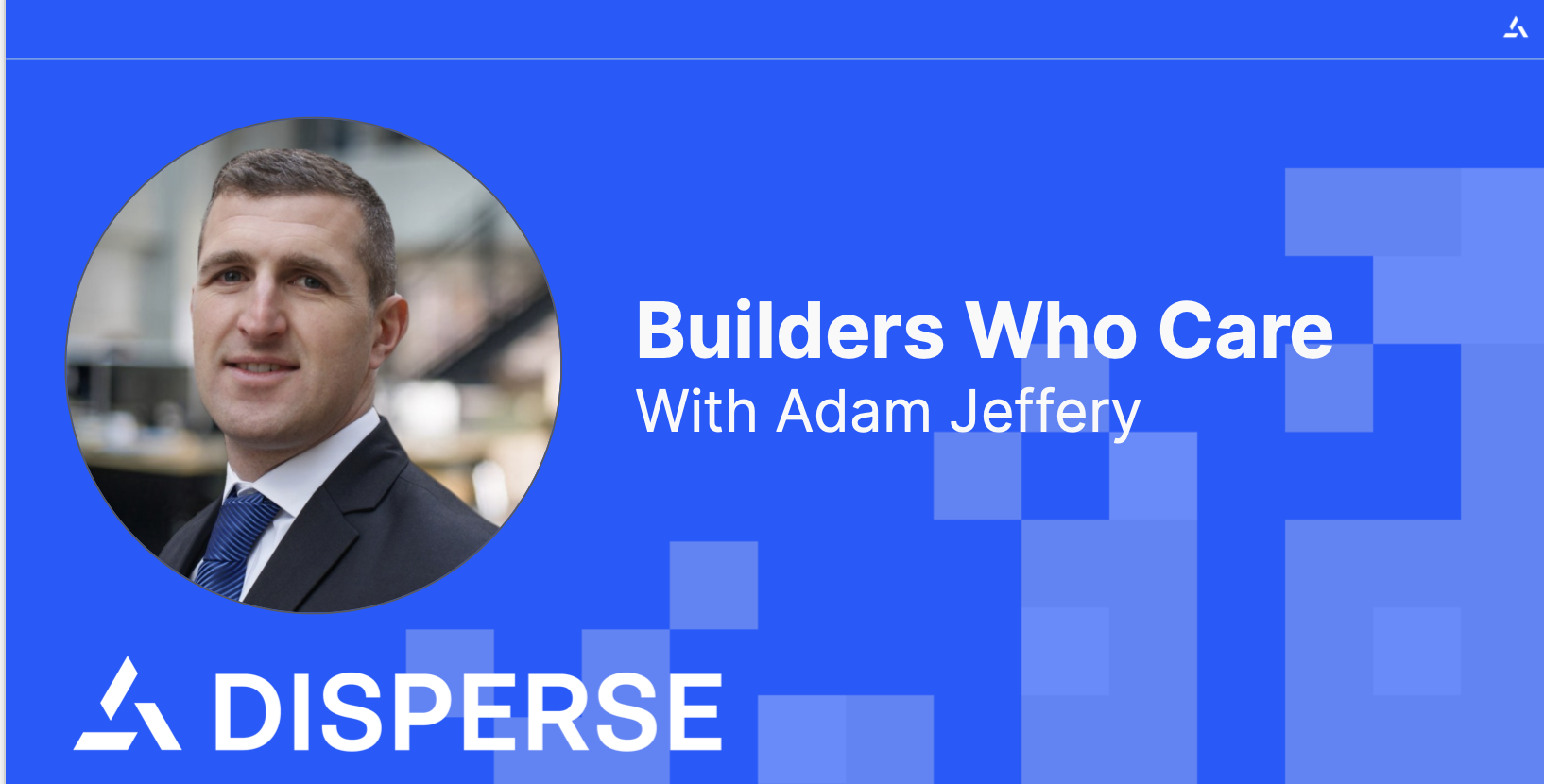 A Builders Who Care interview with Adam Jeffery, Project Manager with MLJ Contracting in New York

Welcome to "Builders who Care", a series of interviews with construction leaders driving innovation in their field. These builders are committed to their craft and to positively impacting the communities they serve. From implementing sustainable building practices to deploying cutting-edge technology, these individuals are leading the charge in creating a brighter future for the construction industry.

Disperse interviews Adam Jeffery, a Project Manager at MLJ Contracting in New York. Adam grew up in Melbourne and got his civil engineering degree there, as well. After working for a major subcontractor in Australia for a while, he got restless, moved to London and worked on several civil and residential projects in the UK. Most notably, the Elizabeth line in London.

Just before the pandemic, he moved again, to New York this time, and did a stint working on luxury retail stores. But he did not enjoy the emphasis on marble and finishing touches. Instead, he loved the more rugged side of construction; pouring concrete, excavators digging into the ground, and cranes lifting heavy stuff into place.

Adam has really come into his own working for MLJ Contracting, which performs prime contracting work for public works agencies in the New York region, with projects as diverse and iconic as Times Square metro station, Brooklyn Bridge and the Police Command Center at the WTC.

He is currently working on a housing association project, which is entering the final stages of being made more resilient against Hurricane Sandy-type weather events. At the project's peak, there were around 230 workers on-site simultaneously.

What excites you most about construction? And what are you most proud of having worked on?

What I like about construction in the day-to-day is the problem-solving part of it. But what I love about building overall is that you can deliver something tangible.

It's that, over time, you can see the structure go up, the roof being put on. I really love to see how things change. And I love the feeling of achievement. At the end of the day, what excites me is to be able to say: we have worked hard, and there were lots of problems to overcome, but now look at what we have made.

A project that stands out in recent memory was Crossrail in London. We helped deliver the Elizabeth line, a new railway that connects central London with its suburbs. I worked on Abbey Wood Station.

It was a complex job. There was an existing line that we had to move over and build a new one in its place. Then demolish the existing station, and build a new, temporary station. And then: build the new station.

It was huge. If you had looked at Google Maps six years ago, you would have seen two lines and a tiny little building. Fast forward to now, and you've got four lines and a giant railway station — capacity has more than tripled in that area. And then you've got all the landscaping surrounding it; it’s a big change for the whole area.

Being a Project Manager on such complex projects must be challenging. What, in your opinion, are the qualities construction leaders need to succeed on jobs like that?

Skills can be learned. And over time, someone with a great attitude will get better. Whereas someone may be highly experienced and capable, but if they've got a bad attitude, it's poison for the whole team.

And if they've got a bad attitude to start with, it's something that I rarely see getting better over time.

The person with a great attitude will try. They will learn. And improve team morale just by being there. They will put in the effort; they'll research, ask questions, follow up on things.

There are endless opportunities to grow and develop, if you are willing to put in the effort. The construction industry is great like that. You are judged on results. So if you finish projects on time, safely and on budget, the sky's the limit.

It’s hard to tell up front if someone has that willingness to go the extra mile. On paper, somebody might have a great resume. But in practice they may lack that drive. The industry is rife with people that think: "Not my problem, let someone else figure it out.”

They will send an email and call it a day. And when you ask them, they tell you: "I did my part; I sent the email." Yes. But did you make a phone call? Because when you send people in the field an email, they might respond or they might not.

There will always be change resistors, who, no matter what you do, cannot be moved to get with the programme. It’s not just in construction, though, other industries have that problem too.

Then I see a large middle group that will change only when it's easy for them. And finally, there is a group of front-runners who will adopt new technology as soon as it's out, because they are excited and curious.

I personally think I belong to that last group. I believe technology will play an increasingly important role in the time to come. And I also see it as a way to gain an advantage in a competitive market.

It's an open question to me, though, which parts of the industry are going to see the most dramatic change. But a few areas where things are picking up is site-scanning, BIM, CAD, those sorts of things.

Automated site data-analysis with the help of reality-scanning, in particular, will get more and more important in places like New York and London, where there is a lot of refurbishment taking place, because of the great need to understand existing conditions.

I am also hopeful that offsite construction will pick up. It is gaining traction, especially where modularity is an option, like student housing, hotels, and hospital units.

I read about this hospital in China; they built it in 12 days. It's basically like this: you create modules like shipping containers, put them on a truck and drive them over. Once on-site, a crane stacks them like the  containers you see loaded on those supertankers.

I have yet to see modularity being used a lot in residential building. But there is no principled reason why you would not be able to.

Then about adoption. Well, there are a few things. For one, the tech should become easier to use. And we will see a big shift occurring when the people in the field start using the same technology as people in the office.

But also, and I have to come back to what I said earlier about mentality versus ability, there is still an attitude problem in the industry. All these guys and girls use smartphones. And I know they are using Google Maps, watching videos, and using email.

They know how to do it. But in construction, as long as they don't have to, they won't. They read the drawings. And then they go build what's on the drawings.

It's a generational issue, of course. And it will solve itself over time. Nowadays if you want to navigate from east New York to west New York, you pull up Google Maps. You'd call somebody crazy if they'd hand you a paper map. That's ancient.

With construction tech, the same thing is happening. Every major project is using tech in some way already and it will only become more common going forward. There will be a time when we can no longer imagine building without it.